Don’t believe what you are about to read. Consider the source: a retired psychologist who is going to rationalize that counselors care about more than money.

THE CASE FOR THE AFFIRMATIVE: that good therapists are only or largely in their profession to make money.

Looks like a strong case to me. How about the case for the defense?

THE CASE FOR THE NEGATIVE: that good therapists are NOT only or largely in their profession to make money. 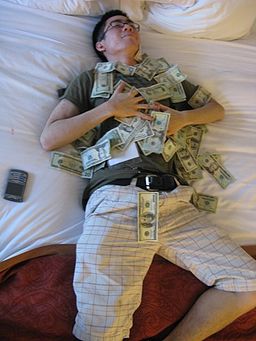 I hope I have convinced you. I doubt that I’ve persuaded all of you. I am not saying those who take on this vocation are indifferent to the value of a dollar, so contemptuous of money and worldly comfort we enjoy shelter in a cardboard box after a long day on the cross. The job is fulfilling, but the greatest part of the satisfaction is not from filling our pockets. Ministering to the suffering is wonderfully rewarding if you do it for the right reasons and have the temperament to match. Should the accumulation of wealth be the primary goal, the job becomes your enemy. If you want such a misguided person as a shrink, look for a “professional” who flagellates himself or sleeps away the day instead.

I hope I do not sound arrogant when I say I earned the comfortable living I made. And, by the way, I write these posts for free, a price everyone can afford.

The truth is, however, a few therapists ARE too concerned with making money. Some have even mastered the art of appearing touched by the lives of others. They can “fool all of the people some of the time and some of the people all of the time, but … cannot fool all of the people all of the time.”* The public in general knows little about the arcane science of psychotherapy. Many who never before consulted a therapist lack knowledge of what might be required to produce a good treatment outcome. I dare say most of us put too much faith in our psychotherapeutic, medical, and legal professionals, not to mention our plumber. The world has become a place of specialists and no consumer is a jack of all trades, ready to make a precise evaluation of the glut of service providers he employs in a lifetime.

My advice? Research the subject of therapy and get counseling referrals from those you trust before you visit Shrinkland, soon to be the newest attraction at Disney World. Know about your practitioner’s experience and training. Evaluate him as he evaluates you. But if you choose to put all of us in a barrel labeled Greedy Self-Interest, you will be dismissing most of us and surely the best of us: sort of like throwing out the champagne with the cork.

*This quotation is attributed to Abraham Lincoln, but can’t be verified. An interesting story about “Lincoln’s” words can be found here: Abe Lincoln.

The first photo is called Buzz Tweed, a fictitious Congressman, created by Buzz Tweed. The second image is A Lazy Person. It is the work of “A Dazed Memory.” Both are sourced from Wikimedia Commons.

38 thoughts on “Is Your Therapist Only in It for the Money?”