It is one thing to be a talented and beautiful opera mermaid, but how do you get out of the pool of those in training and up to a career on stage? Valerie Vinzant had the courage to talk about this with me. Indeed, she sang on the water in Chicago Opera Theater’s 2013 performances of Ricky Ian Gordon’s Orpheus and Eurydice, set in a real swimming pool representing the River Styx.

As Eurydice, she was one of the only two musicians, the other being the clarinetist Todd Palmer, who commissioned the 70-minute piece and gave its 2001 premiere. The Orpheus myth is about love, loss, love’s recovery, and Eurydice’s final departure to the Underworld.

In contrast to the clarinet’s Orpheus, the soprano must sing and act the lovers’ story as well as narrate the tale, while moving from a boat to the water’s edge

Eurydice was the most in-depth character I’d ever experienced. I connected with the reality of the character instead of it being just a story; singing about Eurydice as the narrator and singing about myself as the character — commenting on who I was as a person. As the only singer through the entire opera I had to flesh out the story myself. Two other silent actors in the water represented the lovers, but I had to portray a lot of emotions, from happy to deeply devastated.

The Chicago Tribune’s John von Rhein said Vinzant stopped “the show with her haunting song, I am Part of Something Now,” a hymn to love in bloom.

Vinzant describes herself as both a coloratura and leggiero (light, lyrical) soprano whose training, especially with Carol Vaness at Indiana University’s graduate program, allowed her to find her true voice:

Regardless of the repertoire you must always sing with your voice: not squeeze your voice into a little role or push too much for a darker sound.

Valerie has made the rounds of many of the finest YAPs (Young Artist Programs) in the country, providing her with various training and performance opportunities, including the Domingo-Thornton at the Los Angeles Opera, Santa Fe Opera, Wolf Trap Opera Studio, Steans Institute at the Chicago Symphony’s Ravinia Festival, Chicago Opera Theater, and the Aspen Music Festival. Her repertoire ranges from the Baroque to the works of Esa-Pekka Salonen, under whose direction she was soloist with the LA Philharmonic in the composer’s Wing on Wing. She also recently portrayed Mabel in Gilbert and Sullivan’s The Pirates of Penzance. 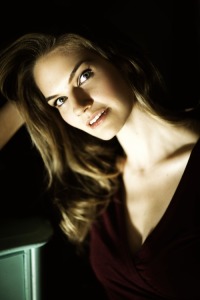 From conductor James Conlon at the LA Opera she came to understand some of the things conductors want of singers in addition to vocal beauty and command of their character:

He expected you to know everyone else’s part and never to listen or you are going to fall behind the rest of the ensemble; also, the need for a line of visual and musical contact with a conductor. In actual performances in a full hall you have no time to adjust to the sound of your own voice. He said, “You aren’t going to hear yourself, just be with me.”

Ms. Vinzant now takes more vocal risks than she did when she was a student or in her many YAP residencies. And she speaks with an uncommon combination of self-confidence and humility. No diva is to be found here, but something precious:

I don’t think I’m God’s blessing to opera at all, but I do have a gift, for sure. I now take risks to express more. Part of the difference between being a young artist and having a career is the contrast between someone telling you what to do and knowing, for yourself, what you want to express: exploring more of my voice and the character’s viewpoint, rather than having to be “right” all the time. In a way I’m gentle with the characters, not slapping some preconceived label (like “ingenue”) on them. I pay attention to the character’s journey. I’ve gone from a student mentality to one of an artist.

Risks, of course, come in various forms and Vinzant is one of the fortunate musicians who doesn’t suffer from performance anxiety. Since leaving the YAPs behind in the past two years she has often filled-in at the last moment, as when she sang the role of Agilea in Handel’s Teseo with San Francisco’s Philharmonia Baroque:

They called the Chicago Opera Theater where I’d covered the role the year before and sang once on stage when the lead was ill. The Philharmonia Baroque phoned me two days before the performance and I had to fly to out in two hours. I had little anxiety, I got on the plane, the musicians were fantastic, everyone was at the top of their game, and I fit right in. I loved it! It’s either you do it or you don’t. I never felt pressure.

I don’t let doubts take me over. I’ve learned how to be “present” in the moment. I center myself before going on stage. I breathe and (meditatively) focus on my breath. I don’t have any preconceived notion of what the performance will do for my career, what the composer in the audience will think, or what the critics will think. Then I can fully become the character without judging myself and I sing better.

Valerie is not innocent of the difficulties of her profession at a moment in history when the New York City Opera and Opera Boston recently vanished. Obtaining an agent is among those challenges. One told her she has a wonderful voice, beauty, and presence, but he couldn’t represent her because his roster of sopranos is saturated with her specific voice type. The life of an aspiring opera soloist is like entering a funnel at the top end: few come out at the bottom able to make a musical career. Your odds of becoming a brain surgeon are easy, by comparison.

Undaunted, Valerie is having success, making a living, auditioning, networking, and letting word of her work do the rest. Her reputation in the Baroque repertoire is especially helpful. I mentioned to her the answer Ben Heppner, the now-retiring world-renowned tenor, gave to the question of how long after his training he took to become “Ben Heppner.” His response was reportedly “Ten years.” He and his wife regularly wondered whether he should continue or find another path to pay the bills and raise the children. I asked Ms. Vinzant where her fortitude comes from:

Music is such an essential part of who I am. I enjoy the music so much I get goose bumps rehearsing even in my own room. That is the fuel for me. I know if I get sick 10 people are waiting to jump in, but once I realized I had something unique to offer the competition noise dissipated.  I’m not worried about them taking my roles. If the day comes that I lose joy in performing or preparing a composition or the day music is just a career, then I hope I can let myself accept that… For me it is so deeply ingrained in who I am that it would be like a death if I lost it. If singing became a burden or painful I don’t think I could do it.

Opera is such a difficult career. So many people tell you and warn you that if you can do anything else you should. When I perform I try not to think that this is a big moment because I’m singing at a big opera house and this other gig isn’t because it is with a little symphony. You need to remove your ego. I sing at amazing places, as well as roles at companies that are not in the best of times. I am true to myself when I say that all these elements make a career.

The photos of Valerie Vinzant come courtesy of Ms. Vinzant. The first of these is a backstage picture of her in costume for her role as Papagana in Mozart’s The Magic Flute. For more about her you may wish to visit her website: http://www.valerievinzantsoprano.com/