As the old saying goes, “It’s better to be lucky than good.”

But sometimes, being good helps a little in determining whether you get lucky.

Now, you wouldn’t think that luck would be an important variable at M.I.T. But the human equation is almost always in play, even in that citadel of rationality and even on a physics test.

The year was 1965. The class was Physics 8.02, the second semester of freshman physics, a course required of all 900 new students at the Massachusetts Institute of Technology. Barely 40 of these young people were women.

As the only National Merit Scholar from Stephen Tyng Mather High School on Chicago’s North Side, you’d have thought that a first year college physics test wouldn’t have presented a problem for Rich Adelstein. But then, you probably haven’t been to M.I.T. As Rich remembers it, the school was a brutal place for those who were not succeeding.

He was succeeding, but barely. He hoped to be on the Dean’s List for the term, but needed at least a C as a final grade in physics to get there. Unfortunately, he’d also begun to get the feeling that he wasn’t quite the scientist that some of his classmates were, but maybe more interested in things like history.

Yet science was what mattered at M.I.T; anything else and people didn’t give you the time of day — didn’t really respect you. These were the sort of kids who, just by a look, let you know that “I can do something really hard and you can’t.”

The culture of excellence, in other words, could be crushing as well as inspiring. The accomplishments of faculty members intimidated you into jaw-dropping awe. And Rich had already heard of suicides occurring at the school. Had the pressure to achieve at the highest level gotten to these students? An important test was coming up on Friday morning at 9 AM toward the end of the first year. Rich had done his best to study for it, but had the distinct impression that most everyone else was better prepared than he was. And, as he entered the large exam room, where 300 of his classmates would be tested, he felt a little like a man hanging on to a slippery ledge — just beginning to lose his grip.

Rich’s group was in a brightly lit armory, while the remaining 600 examinees were divided between two other locations, all enduring the same event at just the same moment. Sitting there nervously, he waited for the proctor to pass him the blue book on which he would write his answers, and then the test itself.

The first question had to do with “Coriolis forces,” named after the French scientist Gaspard-Gustave Coriolis. But it might as well have been in French, a language Rich didn’t know. He read it, he thought about it, and he knew that he had no idea how to get to the correct answer. “Oh, crap,” he thought to himself, while the anxiety thermometer inside of him started to climb from its already elevated state.

Second question. Again, no idea — just a feeling of being hopeless and helpless. Everyone else seemed to be working industriously, writing away. But Rich’s blue book was still blank and a state of panic-induced “brain-lock” was descending upon him. Rich had never — never ever — failed an exam. Would this be the first?

“I’ve got to get a grip on myself,” Rich thought. “I’m starting to come apart. I’ve got to calm down in order to have any chance of passing this.”

And then, an inspiration. “I’ll draw for a bit. That will calm me down.”

And so it was that our hero began to sketch a three-masted sailing ship, like the one at the top of the page.

Little by little, drawing was doing the job. Rich was “in the zone,” captured by the task he had set for himself, something he could do well and that began to soothe the whirlpool of feelings inside that made it hard to think.

Unfortunately, however, he had not accounted for everything.

“Times up! Hand in your blue books!” announced the proctor in charge. Rich had lost track of the clock. And all he had to show for an hour-long physics test was a picture of a ship.

Rich signed his name to the book and passed it on to the proctor. He didn’t want anyone to think that he’d simply blown-off the test and not even come to the exam room.

There was only one possible way to deal with this. In a state of disoriented numbness, like the survivor of a train wreck, he walked out of the armory in a fog of surreal devastation and went directly to his professor’s office, the man who taught his section of the course as his “recitation instructor.” One Nathaniel H. Frank. 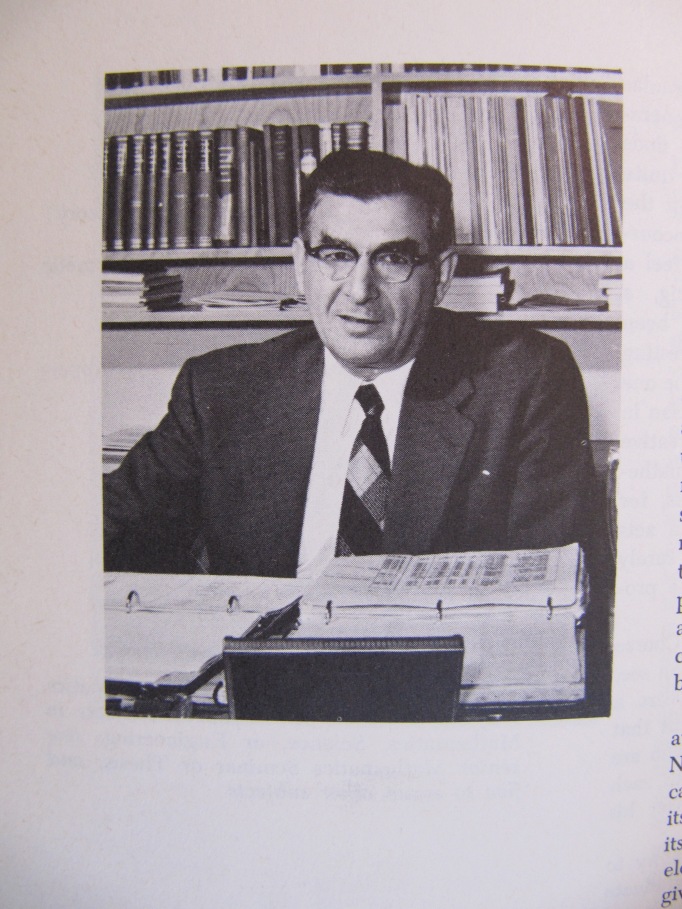 Dr. Frank was then a man of about 60, until recently the head of the physics department, a person particularly respected for his leadership in revising high school physics curricula throughout the country. During World War II, he had worked at the M.I.T Radiation Laboratory. Indeed, it was in that place that radar was developed.

Frank was not just a well-known scientist, but someone who cared deeply about education. Himself a graduate of M.I.T, he was short and stocky; had a full head of wavy, graying hair; and wore glasses.

The academician had been teaching just about 40 years when he first encountered Richard P. Adelstein.

Rich did the only thing he could think of doing. He told Dr. Frank that he had just come from the armory ordeal. Rich related his panic, his attempt to calm himself, and the fact that time had gotten away from him.

He did not want the scientist to think that he was trying to be disrespectful by drawing a boat; nor did he ask for or expect a second chance at the test. Rich simply hoped to make Dr. Frank understand that he took the course seriously, but, somehow what was left at the end of the hour was only a sketch.

“Well, don’t worry about it now,” the teacher said in reply. “Let’s just see what happens when we grade the exams.”

Then Frank gave the young man a grandfatherly smile. The kind of smile that an old man gives to a young man when he has seen many such students — earnest and terrified — all feeling as if the world is coming to an end; and, when he can tell which of them are sincere and which of them are just jerks.

“Let’s see what happens?” Rich thought to himself. “I know what is going to happen. I’m going to get a zero! This isn’t good. I took a physics test and I turned in a picture of a boat!”

But Rich kept all this to himself. Soon he was walking back to his Baker House dorm, and a room that now seemed like a cell on death row.

The weekend was miserable. Waiting is a terrible thing when you can see the ax that is soon to fall on your neck. Sleep was difficult, each daytime second gruesome. Monday and the end to the calamity, whatever it might be, couldn’t come soon enough.

Monday did arrive, finally. Perfect scores on tests were exceedingly uncommon at M.I.T. Indeed, exams were graded on a curve. As Rich sat in the classroom, he looked at the grade equivalents that the professor was putting on the black board. The highest scores fell short of perfect, but there were actually lots of poor scores that were still good enough to pass, with 30 being the lowest grade that permitted a D.

Below 30 and you failed.

In due time the blue books were handed out. Rich was beginning to be resigned to his fate. He would certainly fail with a zero, he thought to himself. But, at least, he’d be 30 points from a passing grade on the exam, not nearly as far from a D as he feared. If only he could have obtained a 30, however, the chance of getting a C as a final grade in the course might still have been within reach and allowed him to get on the Dean’s List.

He forced himself to look at his blue book.

He rubbed his eyes.

“There must be some error here,” he said to himself. And then, once again, the same recurring idea: “I just took a physics test and turned in a sail boat picture! This can’t possibly be right.”

When the class ended Rich made another death march to the office of Dr. Frank.

“Professor, I think there was some mistake on the grade I got. The blue book was marked with a 29.”

“Oh, no, young man, there was no mistake,” said Professor Frank while looking at Rich warmly.

“How can that be?” asked Rich.

“Well,” said the good doctor, “that was by far the best picture of a sail boat on any of the exams.”

And, in that moment, Rich felt the small breeze — the puff of air — that one feels when one of life’s little bullets whizzes past harmlessly, narrowly missing its mark.

One has “dodged a bullet,” as the saying goes.

Of course, it was not really “the best picture of a sail boat,” but the only such drawing that anyone turned in. This was simply the professor’s funny way of saying that there was no mistake here — of letting young Rich know that the world hadn’t ended, that the sun would rise tomorrow giving him another day to prove himself; that he understood that “things happen” even to the best of us.

He was a man, after all, who knew first hand what it was like to be a freshman at M.I.T.

And Rich did get a C for the course and did make the Dean’s List.

You should also know that this is a story that Rich, now himself a college professor at Wesleyan University, retells from time to time, when he sees a similarly lost student, terrified but earnest, worried that his whole future is about to go under water for the last time, and makes the same judgment that Dr. Frank did in 1965.

And in so doing, throws the young person a life buoy from the imaginary ship that almost sunk him, but ended up saving him 46 years ago; the ship commanded by Nathaniel H. Frank. If you’d like to read a rather different story about Rich Adelstein, please see: The Long Road to Becoming Rich.

The top photo is a Naval Ship of Brazil Taken by the Brazilian Navy, followed by an Image of the Dome at the M.I.T. Campus by Fcb981 (edited by Thermos); both sourced from Wikimedia Commons. The portrait of Dr. Nathaniel Frank comes from http://www.webmuseum.mit.edu/ The picture of Dr. Richard Adelstein that follows it is sourced from http://www.wesleyan.edu/ The final image is a Life Buoy, by Shirley, also from Wikimedia Commons.

5 thoughts on “Of Teachers, Tests, and the Luck of the Draw(ing)”