The experience still haunts men. Older men. They had to swim in the nude in Chicago Public Schools and elsewhere around the country.

I wrote about the psychological effects here: When Boys Swam Nude in Chicago Public High Schools. If you don’t think such trials should have made such a difference to those teens, then why have about 20,000 thousand people read my post, not to mention other posts on other sites?

Boys searched for reasons to get excused from swimming. They suffered distress over psoriasis or sundry obvious “defects.” Shame, bullying, and potential arousal at the wrong moment were inevitable; especially anything that might betray a homosexual inclination (long before the word gay meant men who favored other men).

Today, however, I want to answer a question I could not in 2014, when I wrote the post linked above: how did such a practice begin?

According to WBEZ Radio’s Monica Eng:

The country was … obsessed with fighting disease and promoting personal hygiene, which in the 1920s, was also associated with “good morals.”  Health officials worried that allowing potentially dirty fabrics into public pools could introduce germs, and bacteria-killing pool chlorination had still not been perfected.

Plus, at the time, swimming pools had fairly primitive filters that could easily be clogged by fabric fibers from swimsuits, which were made of cotton and wool – yes wool.

So, in an effort to minimize bacteria, keep pool filters from clogging and ensure male swimmers were clean, the American Public Health Association (APHA) recommended the following in their 1926 standards handbook:

Those recommendations, nothing more, turned the tide (pun intended) as one school system imitated another and made the practice compulsory. Thus, we have another example of the often observed human tendency to cause unintended side-effects growing out of an effort to make the world a bit better.

Read or listen to the whole story as reported by Monica Eng here: Why Boys Swam Naked. 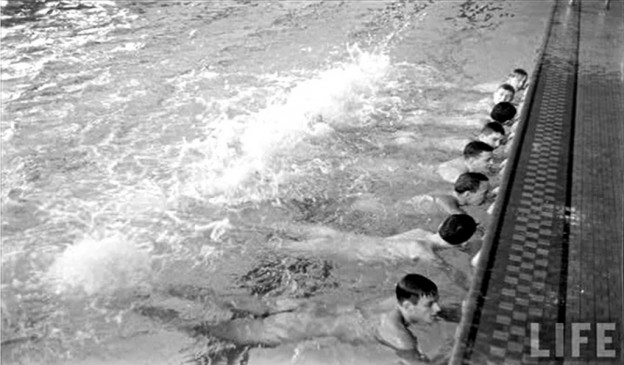 At a time when teens expose lots of flesh, it will probably surprise a few of you that high school boys used to swim in the nude when everyone else was much more “covered-up” than today. That practice happened in many places, but it was routine in the (CPS) Chicago Public High Schools in the middle of the last century. Research suggests it stopped at some time in the 1970s, but this post isn’t about how long it lasted. It is about the effect on those of us who lived the experience.

The privacy concerns of today were then unknown. Social Security numbers that would open the door to identity theft in 2014 were unprotected by most people 50 years ago. So, too, were the nude bodies of teen males from about age 13 to 18. It was part of what was called physical education (PE), but the lessons of this particular class were perverse.

We followed orders. We didn’t question it the way one might today. Our fathers, many of whom had been subjected to the same expectation, didn’t ask about it either. I don’t remember having any conversations with my folks or my friends, the latter until many years later. Then the injured skeletons finally popped out of the pool closet.

Organized nude male exercise dates as far back as Ancient Greece. Socrates talks about it in Plato’s Republic and even suggests at one point that male and female potential “guardians” of one’s ideal municipality should be required to work out together buff naked! At least nothing like that happened at Mather High School or elsewhere in the CPS system. Physical education wasn’t co-ed. The young ladies wore unattractive “tank suits” covering crucial parts. Males alone followed the drill sans a bathing suit and did so out of the sight of anyone but their classmates and the teacher.

Believe me, for some people I knew, just standing around nude in the confines of a cold swimming area was bad enough without an audience. Let’s start with the fact that you’d just come out of a shower warmer than the air and water in the “pool room.” The swimming area was tiled. Sitting at pool’s edge or on tile benches always felt like squatting on blocks of ice. Teeth chattered. That was just the start.

Once fully in the water, of course, brought relief from the ease with which others could inspect your “equipment.” There were always some kids who were “advanced” in this department. Others could rightfully have been called “developmentally delayed” in terms of secondary sexual characteristics like pubic hair. There were size differences, too. Comparisons were both inevitable and impossible to avoid, although most of the boys tried to be discreet about it.

Embarrassment came to those targeted by bullies, as their successors surely do today too, especially from the “big guys” who had no problem in any area of growth and enjoyed a little sadism. Mocking occurred, egos crumbled like cookies. These were the stories uttered for the first time (in my non-professional experience) by classmates I saw at the 40th Class Reunion. For a few, the memories remained painful. Young men are enormously insecure in the sexual development and attractiveness department. An entire class devoted to seeing nude bodies of your classmates could only turn out badly for some.

I wonder what the teachers were thinking, not to mention the school administrators who sanctioned this practice. I’ve heard it said that some claimed it was a matter of cleanliness. Or perhaps, somewhere way back, someone had read about Ancient Greek physical ed. and thought it sounded great. “It will make men out of them, maybe even the next Achilles” he must have been thinking.

The eventual decision to require swim trunks might have been the result of increasing concerns over discrimination bubbling up in the 50’s and ’60s about other things, notably race and eventually gender bias. Since only the boys had to swim nude, it was the male gender being disadvantaged. I really don’t know with certainty why the course changed. Surely it didn’t end all at once everywhere that it was happening in the USA.

Nor must anyone who required male nudity have considered the excruciating circumstance it must have created for gay teens at a time before the word “gay” meant anything but being jolly — when custom permitted more pejorative and degrading names for those kids with a predilection for same-sex relationships. And remember, teen-aged boys have enormous difficulty controlling the automatic arousal that can happen anytime, anywhere.

That reminds me of Mae West, a femme fatale of early talking movies. She commented to an attractive male, “Is that a pistol in your pocket or are you just glad to see me?” But I’ll tell you from personal experience that erections often happen to 16-year-old males at the most inopportune moments. I find it rather ironic, in light of the overwhelming number of commercials for middle-aged men with problems of sexual performance these days.

To end, here’s  a story I was told by someone who saw it happen in another CPS swim class. Doubtless it wasn’t the only one of its kind. The teacher wanted someone to demonstrate the back float. The first couple of kids were chosen at random, but couldn’t manage the task, frustrating the instructor. “Hey Murray, you’re the finest swimmer here, show these guys how it’s  done,” he finally barked. Murray tried his stalwart best and did, indeed, display the ideal back float form for the 30 or so fellow-students assembled around him.

There was only one problem for good-old Murray. In the middle of everything, the poor Murray-meister had an erection that popped up like the opening of a switchblade, automatic knife. No sooner did it appear, than one of the class wags yelled out, “Up periscope, Murray!”