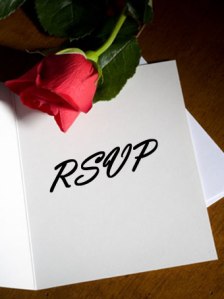 In the ancient world (or perhaps I should say, in the 1960s) everyone knew what R.S.V.P. meant. Today, not so much. Oh, people do think they know. But, you can be dead sure and dead wrong.

Consider today’s essay a short lesson in good taste and good manners. It might make people like you more.

An example will illustrate the point. I had the occasion to invite several people to a dinner for an organization with which I am involved. It is a not-for-profit corporation. These particular invitees had been helpful to the enterprise, but we didn’t know all of them well. The invitations requested them to R.S.V.P. It was clear that the dinner would be free to each one, a material way to thank them for their good-will and assistance.

Fourteen of these invitations were sent, but only three responses were received as the date approached. About two weeks before the event emails were sent with a second request to R.S.V.P. This brought additional answers to the question of whether we should expect their attendance or not.

Out of the blue came two emails from people who had not been invited, telling us that they would be coming. Whoa! How did this happen?

It turned out that these were associates of two of the real invitees. The newcomers were individuals whom we had never met and had not been involved with our not-for-profit corporation. They’d been given the invitations and encouraged to attend our event. Indeed, they were temporary employees in those organizations that had been helpful to us.

This put us in the awkward position of having to tell these people that they had not been invited (as they already knew); and, since we are a charity, to inform them that we had a limited capacity to provide complimentary dinners that would diminish the funds available for our philanthropic efforts.

The attempt to pass along our invitation reminded me of a practice that has occurred in wartime. During the Civil War, for example, you could get out of serving as a soldier if you could find someone willing to substitute for you. Still, this was hardly the Civil War, but a simple dinner invitation done in gratitude for the help provided to us. No bullets would be flying.

So what happened? Why did we receive responses from less than 2/3 of those to whom we wished to show some kindness and gratitude? And why did two of those people think it would be appropriate to pass along our invitation to others we did not know without asking us if this was permissible?

First, I don’t think anyone intentionally wanted to be rude. These are all good and decent folks. They do good work at their places of employment. They had no motive to be disrespectful and I’m sure had no intention of being thoughtless.

What other explanation might then account for the failure to respond? I suspect that R.S.V.P has somehow lost a bit of its meaning, the compulsory quality it used to carry. So what exactly does it mean to R.S.V.P. and what did it mean once upon a time?

Let’s start with the literal meaning. It is an abbreviation of a common French phrase whose translation is, “Please respond.”

The high society of England adopted French etiquette in the late 18th century, and the writings of Emily Post (the authority on etiquette) aim to offer a standard no more stringent than that tradition. Late 20th century editions (of her book), building on her 1920s beginning work, say… that “Anyone receiving an invitation with an RSVP on it is obliged to reply….” and some recent editions describe breaching this standard as “inexcusably rude.”

Emily Post advises (that) anyone receiving an invitation with an R.S.V.P. on it must reply promptly, and should reply within a day or two of receiving the invitation.

OK, so when you receive a written invitation to an event, it is expected that you will quickly inform your host whether or not you plan to attend. That puts some pressure on you: if you are coming you need to so inform the sender; equally, if you are not coming, your anticipated non-attendance must also be reported.

I suspect that many of us don’t think about these things too much; don’t think about the reasons our potential benefactor needs to hear from us, sooner rather than later or not at all. Some assume that they need to respond only with regrets at not being able to come. And, indeed, many invitations come with the message “Regrets only.”

I imagine that when some of us delay responding or don’t respond at all, we are thinking, “Oh, one person more or less isn’t going to matter that much;” or “I’ll get to it later.” No harm is intended by this attitude, yet there can be inconvenience or expense to the person extending the invitation. Remember, that person has to answer the question “Should I buy enough chicken for a dinner of 15 or 115?”

I also have witnessed, as have all of us over 40, that the civilized world has become a more casual place, one with fewer dress codes, social restrictions, and compulsory expectations. A world that is a bit friendlier and more at ease. But, sometimes that ease is purchased at the price of slackness, inconsideration, and unreliability. I can’t tell you what the perfect balance is, but I can tell you that if you are planning an event, you hope that people take your invitations seriously and make your life a little easier by informing you of their plans with respect to it.

Immanuel Kant, the great German philosopher, offered us a way to think about situations like this. He wrote about the idea of a “categorical imperative” when it comes to rules for moral behavior. He suggested that each of us should ask ourselves some version of the following question: Would I be content if the rules I use to govern my behavior (like viewing an R.S.V.P as optional) also apply to everyone else in the world? And, would the world be better or worse for it?

Really, it is pretty simple. The Golden Rule is almost always a great way to evaluate our conduct. Do unto others as you would have them do unto you. Even in response to dinner invitations.