This is a story about a musician, but not about music. It is about you and me and especially all the loud voices in today’s world who not only claim to know what is right and what is wrong, but who is right and who is wrong. Most particularly, it is about a great man who had every right to judge someone else, but chose not to. I’m talking about the famous Italian conductor of symphony and opera, Carlo Maria Giulini.

Who was Giulini and what gave him that right? Born in 1914, Carlo Maria Giulini would become the Music Director of La Scala, Milan; Principal Guest Conductor of the Chicago Symphony (1969-1973) and the Music Director of the Vienna Symphony Orchestra (1973-1976). But it was much earlier in Rome that he played as an orchestral violist under the German conductor Wilhelm Furtwängler (1886-1954), as well as many other great conductors; and it was Furtwängler who Giulini refused to judge. Not as a musician, but as a man — a man in the middle — between the Nazi state that ruled his homeland and his conscience. 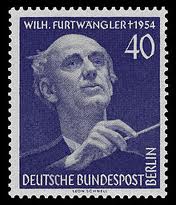 Furtwängler remains a controversial figure to this day for choosing to stay in Germany during the Third Reich (1933-1945). His celebrity would have guaranteed him important positions throughout the world. But, while evidence indicates that he did assist some Jewish musicians in the Nazi bullseye, he also allowed himself to be used as a propaganda tool by the government. Never having joined the Nazi party, he was seen as vaguely disloyal by some within Germany, but just another morally compromised German by some outside of it.

Giulini had his own set of moral dilemmas. Although drafted into the Italian Army that was allied with Germany, he and his two brothers, Steno and Alberto, made a pact not to kill:

We would not serve as Mussolini’s (the Italian dictator’s) agent to take anyone’s life, even if it cost us our own. (As a second lieutenant) when my men were fired upon, I had to appear to respond, so I would draw my pistol and fire high above their heads. One of my brothers (Steno) was in Russia with the Italian ski troops. His situation was horrible, with cold and snow and the constant attacks of the Russians, but he never loaded his rifle.

Even this stance proved inadequate to the circumstances that Giulini faced. In Yugoslavia, the Italian Army was confronted with partisan attacks and began to engage in revenge missions against innocent civilians. Before long, after the Allied invasion of Italy, Italy formally switched sides in the war — but not Giulini’s unit, which was ordered to stand with the Nazis in defense of Rome against the advancing U.S. Fifth Army. Giulini defected.

It was late 1943 and Giulini now found himself a wanted man, his postered name and face to be seen with the direction to “shoot on sight.” For the next nine months Giulini, two comrades, and a Jewish family hid in a tunnel below his uncle’s house in Rome. Newly married, his wife Marcella and Italian resistance fighters provided supplies. It was Marcella who gave him the library copies of orchestral scores that he studied by candlelight and that they hoped he might eventually conduct if he survived.

On June 5, 1944 the Allies succeeded in liberating Rome. Thomas Saler, the author of Serving Genius: Carlo Maria Giulini, whose book is the source of much of the wartime background presented here, describes the scene:

After word reached him that the city had been liberated, Giulini climbed out of his underground hideaway and stepped outside. It was the first time in nine months that he saw the light of day and breathed the fresh air. Overcome with emotion, he walked to a nearby tree and kissed it.

Giulini was owed a four-year-old debt by Rome’s Santa Cecilia Orchestra as a result of having won the right to conduct it in a contest before war intervened. Thus, on July 16, 1944 he led his first ever concert — the concert that celebrated the liberation of Rome.

On March 18, 1978 I had the chance to interview the now legendary maestro. This elegant and charming man, polite and dignified, responded deftly to musical questions at the outset of our time together. That is, until I asked him about his opinion of Furtwängler’s decision to stay in Germany and the latter’s wartime behavior. He was not prepared for my question. I was not prepared for his response.

Giulini’s demeanor changed. While he was not impolite, I’d touched a nerve. He began by putting me in my place: “You are very young.” I was 31, he was 63. Giulini continued:

It is very, very difficult to judge the position of a man. It is difficult for you in American to understand the problems we had in Europe. It is difficult to put yourself in a position, in a special moment (in history) that is impossible to imagine if you didn’t live in that time. The last thing I should do is express my position on this point. I had my personal political position, I took my position — very precise. I was not a fascist, and at the moment I had to make a strong decision, and also a dangerous decision, I took it. But I am not in a position to do any criticism of another person.

The conversation continued, but it was clear that the subject of Wilhelm Furtwängler was closed. In that instant, I had seen the man who some called “the steel angel,” both because of his ever-present respect for people, including the musicians he conducted, and his backbone. He was every bit of both.

Giulini conducted his final concert with the CSO that evening. He would now be off to Los Angeles to take up the last major post of his career, as Music Director of the Los Angeles Philharmonic. Unfortunately, his wife’s sudden and chronically debilitating illness a few years later ended Giulini’s American career in 1984. He returned to Europe, never again leaving his Milan home except for a few days at a time to guest conduct, so as not to be away from Marcella for extended periods. His formal career ended in 1998 and he died in 2005.

Giulini is said to have been a well-read man, but I don’t know if he knew the Stoic philosophers like Epictetus. It was the philosophy of Epictetus that U.S. Navy Vice Admiral James B. Stockdale credited with helping him survive while he was a prisoner in Hanoi during the Vietnam War. Over his seven-and-a-half years in enemy hands, Stockdale was tortured 15 times, in solitary confinement for over four years, and in leg irons for two. In other words, another man who, like Giulini, had every right to judge.

In a 1995 lecture to the student body of the Marine Amphibious Warfare School, Stockdale quoted Epictetus:

Where do I look for the good and the evil? Within me, in that which is my own. But for that which is another’s never employ the words “good” or “evil,” or anything of the sort.

“Goods and evils can never be things others do to you, or for you,” Stockdale concluded.

Giulini would have understood.*

My gratitude to my friends Tom Saler and John Kain, the latter for alerting me to the existence of the Stockdale lecture. The photo of Vice Admiral Stockdale came from the U.S. Defense Visual Information Official Site, as downloaded to Wikimedia Commons by Darz Mol.