If life is like reading a book, many of us come to therapy when the next page stops us. The white paper rises up and forbids progress.

For the moment, his will triumphs over ours. Forward motion feels beyond our strength.

We set the text aside, but it finds us and opens to the unchanged page, always to this page.

Our nemesis, for so we think of the volume in this way, shows up close by our fear of intimacy or self-assertion. The adversary lurks around the corner whenever we run from a challenge. In the bedroom, the tormentor waits for gloom to inhabit sleep.

The strange companion watches as we make our usual mistakes.

He is the silent manuscript resting on the empty barstool as we try to drink away our woes. You find him sitting beside the distraction of sex with someone we met ten minutes ago.

Infinite patience and stubbornness rank high in his list of qualities. He hangs around, offering us the subtle summons to advance the story.

He knows all the written words that came before. Nor does he tire of watching us repeat them in forms always a bit different, always the same.

It is the tale of our life, the journey so far. 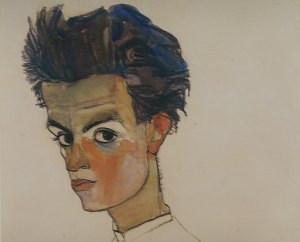 Until we recognize the book as our past path, he will offer us his reminders. Perhaps, if the reader confronts whatever a new chapter might hold, the Monster shall begin to smile.

Wisdom tells him this part of the notebook remains unwritten.

Will the reader acknowledge this? Will he face the creature and perceive that the behemoth is a friend?

Only then might one look back at the title and see “The Autobiography of ___________.” The blank spot awaits a name. The virgin space of parchment offers itself to us.

Shall we take ownership of the only life we have? I mean the unwritten parts.

How many empty pages await, filled with possibility?

Pick up the pen.

The top image is a 1915 self-portrait of Helene Schjerfbeck from the Finnish National Gallery. The second self-portrait is Egon Schiele’s work taken from the Leopold Museum of Vienna, thanks to Professor Mortel. Both were sourced from Wikimedia.org/ 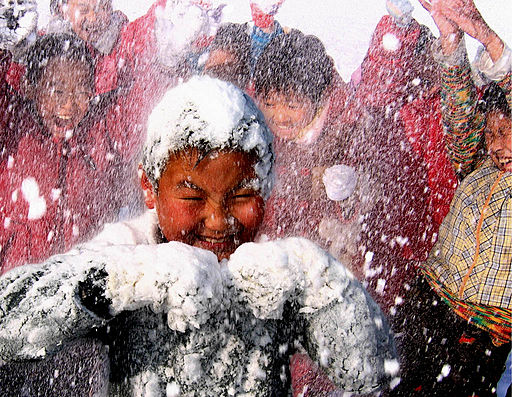 The knob fell off my hotel room door. The room had the wrong number of beds, the mattress sagged, the shower would have made an Eskimo’s teeth chatter, and the restaurant included pieces of glass and wire in the food. A nearby hospital demanded payment for an expensive test they improperly submitted to my insurance company.

OK, not all events were on the same day or in the same place, but these unpleasantries happened over a period of years at a variety of locations.

They were opportunities to become assertive and I became pretty good at taking on poor service and unfulfilled promises.

I had not always been adept, however.

I did not deal with such matters from strength as a young man, but I learned by doing. We don’t become confident waiting for the emergence of the ability to assert ourselves, we become confident by asserting ourselves. We get better gradually. That said, this particular kind of “training” isn’t fun.

In all the cases described – and more – I received compensation, usually enough to satisfy me.

I’ll share some thoughts on the potential trepidation of this type of challenge, as well as what I learned about the best way to succeed in dealing with these difficulties.

MEETING WITH A CUSTOMER SERVICE REPRESENTATIVE OR MANAGER:

A FEW OTHER CONSIDERATIONS:

The top image is A Snowball Fight in China by 大雄鹰. The second photo is a Giant Snowball, Oxford by Kamyar Adl. The final painting is Three Lawyers in Conference by Honoré Daumier. All are sourced from Wikimedia Commons.