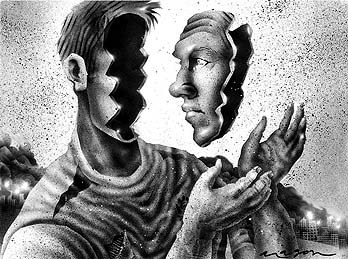 We spend more time trying to understand the motivations of others than our own. Not that we aren’t focused on ourselves, but our internal machinery is more likely to ask “How shall I handle this problem?” than why you did or didn’t do something.

“What caused me to do what I just did?” is not at the top of our self-examination question list.

If we are already sure of our motives, as most of us are, self-analysis doesn’t occur. The reasons for our actions seem obvious.

In response to criticism over his remarks, Trump countered, “I don’t have a racist bone in my body.”  Mr. Trump is certain of his motives without even a bone scan to prove it, but I am much less confident than he is. Is his belief about himself correct? We might ask the same question of ourselves. Ergo, my title: How Well Do You Know Yourself?

I will give you a chance to find out shortly.

I raise the topic because we aren’t as insightful about ourselves as we might be. For example, in matters like politics and religion, we arrive at our opinions intuitively, but think we reasoned them out. In fact, according to Jonathan Haidt, our attitudes are driven by instinct and bubble up from our unconscious. Only later does our logical brain kick-in and generate reasons for those predetermined opinions. The thinking cerebral cortex therefore takes the job of defense lawyer or public relations advocate to justify attitudes and make them palatable to ourselves.

Haidt says we are like monkeys riding elephants. The emotional elephant is 90% in charge of leading the way, but the monkey logician on his back thinks he is in control. I imagine you believe this about some of the people you know — the ones who fool themselves. Perhaps not yourself, however.

You might consider Mr. Trump to be like a friend who doesn’t understand himself — isn’t honest with himself. “The Donald” denies any kind of dominant, irrational, and instinctive prejudice, despite his recent comments disparaging Mexican immigrants. If you believe you are more self-aware than Mr. Trump, his example won’t cause you to question your own psychological self-rationalizing process.

Nearly everyone believes himself to be thoughtful — careful not to jump to conclusions. Indeed, you might believe the two of us are like the majority of those who answered the following Gallup telephone survey with a “yes,” saying they’d vote for a woman, a black, or a Hispanic for President.

The Gallop poll results are below. The question asked of participants comes first, then their responses: 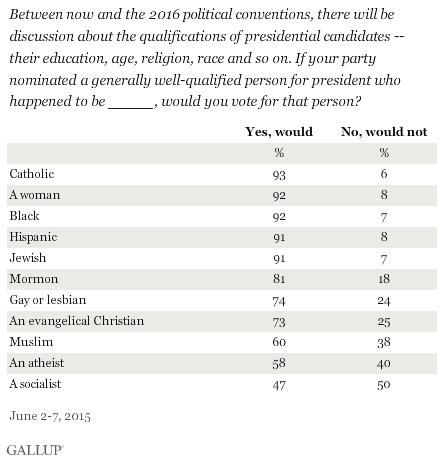 I don’t believe the data, at least in the top few categories. Why?

First, most of us recognize the political incorrectness of saying we wouldn’t vote for a woman, black, or Hispanic. Even to someone on the phone who promised not to share the information. Second, we are hesitant to admit our bigotry to ourselves.

Finally, look at the question again. The second sentence reads (with my italics): “If your party nominated a generally well-qualified person for president who happened to be ____, would you vote for that person?” If you are prejudiced, you could well rule out most any woman, black, or Hispanic instinctively. At the same time, however, you might say to yourself, “but if (hypothetically) he has the right stuff, then he’d get my vote.” It wouldn’t take long before you pat yourself on the back for being enlightened. In effect, you have persuaded yourself, “the person’s gender, race, or nationality isn’t important, but only the ability to do the job.” The poll, in the example just described, would produce an inaccurate result.

Now is your chance to find out who you are. The good folks at Harvard developed something called The Implicit Association Test.  Their creation is not like Gallup’s poll. They don’t ask only about your beliefs, but measure your reactions to pictures and words to uncover what your implicit (unconscious) attitude is.

You might be sure you lack bias, but the test is capable of surprising you. No guarantees either way. Perhaps you are as color blind as you think you are.

Take the 10-minute measurement: Implicit Association Test. Click on “Social Attitudes.” Then you will have at least a partial answer to the question: how well do I know myself?

There are a great many tests on the site. They deal with our imbedded reactions to race, age, overweight, sexual preference, mental illness, etc. Don’t expect, if, say, you are black, to automatically have a more favorable implicit association to blacks than to whites on the test particular to such responses.

Another point. You are likely to ask yourself whether a connection exists between preferring “white” over “black” (for example) and your chance of discriminating against someone who triggers an implicit prejudice. Not necessarily. You will find a more detailed answer imbedded within the site after you decide to take a test.

Of course, I don’t know how you, dear reader, will score. Are you, as Dostoevsky wrote, a hostage to those “things which a man is afraid to tell even to himself?”

Do you have the courage to find out?