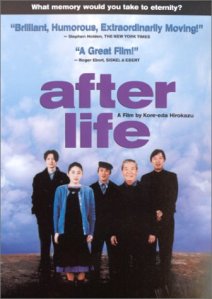 If you could remember only one moment from your entire life, what would it be? Or, to put it differently, if eternity (heaven) consisted of reliving that single experience forever, what moment would you choose?

Before I reveal to you how I would answer that question, let me tell you about a movie that deals with this rather odd dilemma. It is a 13-year-old Japanese film called After Life. It depicts a group of recently deceased people who assemble at a sort of transit station on their way to whatever is “beyond.” They are told that they will have several days to decide on their own version of eternity, which will consist of living forever in whatever single moment they choose from their just-ended life history on earth. They are each assigned a counselor of sorts to assist them with the choice.

To live “in the moment” necessitates that they give up that part of themselves that, like all humans, allows them to look back and remember the past, as well as to look forward and anticipate the future. Experiencing whatever large or small single event is most precious involves sensations and feelings attached only to that slice of time rather than to anything else, even including other positive relationships, experiences, and events. And so, perhaps not surprisingly, each person in the movie struggles with relinquishing all of their other memories, relationships, and daily preoccupations in return for an eternity of living within a single instant in time with nothing else on their mind.

In effect, what the movie is indirectly asking us is to determine how we value things. That is, to decide what means the most to us; or, perhaps, what experience has been the most pleasant or exciting.

Much depends on when one is asked. I am quite certain that I would have chosen a different moment if I had to make the choice in my 20s rather than in my 60s. Not only do memories change (often losing intensity) as we revisit them, but their relative importance is altered as new ones are woven into the tapestry of our lives. In my 20s, I might have wished to relive the intense excitement of a personal athletic triumph, or winning an award, or a blissful sexual encounter. If you’d asked me in my teens, I might have chosen a particularly thrilling baseball game I’d attended. But, as I think about those kinds of things at some distance, I know I wouldn’t choose them today.

You might ask “why?” Well, I’ve seen lots of good ballgames and I probably care less about sports than I ever have at any time in my life, even though I still enjoy these as a spectator. Maybe, as a Chicago fan, I simply have seen too many defeats for one lifetime! But, spectator sports are more about someone else’s experience that you vicariously participate in, rather than your own. So if I were to choose one moment from my life to relive, it wouldn’t involve watching someone else perform. And, since my own athletic successes were quite modest, that category gets knocked off the list of potential winners in the area of “reliving.”

“The Dugout” by Norman Rockwell

OK, what about sex? I knew you would ask. For most young men, I suspect that sex is the dominating preoccupation, at least until they lose their virginity. Then, assuming that they are able to have sexual relations with some frequency, it becomes a thing that fades as a singular focus. Yes, I know that there are people for whom it appears to be the only issue that matters. A pity. While it is an important part of life, I doubt that most people (even including men), as they cross over the threshold into heaven, would say, “Boy, if I could only get laid one more time!”

Nor do I think that I, personally, would like eternity to consist of the intensity of a continuous orgasm. I guess that what I’m getting at here is that the physically stirring nature of that experience isn’t any different (I suspect) from what a dog or a cat or a mountain lion feels in the moment of coitus. For eternity I’d choose something that involved every part of me, not just the physical part.

What else might I consider? Well, I met and interviewed my hero, Carlo Maria Giulini, when I was 31. Memorable, but not really a contender. I have heard lots of terrific musical performances and attended a few plays that had me spinning for days. Again, watching and listening, whether it is baseball or Brahms, aren’t as valuable as those endeavors that you do yourself. And while I had countless profound experiences in doing psychotherapy, I doubt that even a brain surgeon would take a single successful operation with him or her into a personalized version of heaven. Nor is there anything unique about such things, as a rule. No, I think the actions or experiences that you repeat probably don’t have the special meaning that is required for you to cherish them forever, above those that happened just once.

Well that narrows the focus, doesn’t it? The contenders for your afterlife usually have to consist of things that you participated in (not watched) and that happened only once. Let me tell you about three such instances that I think about from time to time.

In her 83rd year, my mother’s unhappy life was particularly difficult. Not only was she in great physical pain, but she’d lost my dad several months before. My visits with her had frequently and historically been unpleasant. She’d accumulated much anger in the course of her time on earth and those closest to her were often targeted. My weekly journey to see her was dutiful, but both of us knew that I didn’t perform the obligation out of a sense of joyous anticipation.

Mom was a very clever lady who could get under your skin with the speed and deftness of a chef at a Japanese steakhouse. Even though I had learned how to deflect her sharp-edged and pointed affronts, I did have to be on my toes or deaden myself to the jabs that could be expected. But, one Sunday, everything changed.

This woman, who had told me more than once that she prayed to her mother and my father to die as soon as possible, was in a particularly light mood. She didn’t seem to be in pain that day and was the funny, warm, joyous being I had not seen in decades. We laughed, we talked, we showed affection. It was a small miracle.

When I returned the next week, things were back to “business as usual.” And one week later, she was unconscious when I arrived and dead within days. But that Sunday two weeks before her demise was a gift. When I think back, it is with a mixture of happiness and a tear or two. I got to see, for a brief moment, the best of my mother just before the close. And, I got to be with a woman I loved — briefly, finally, free of pain — the emotional and physical pain that was her nearly constant companion for much of her life.

The second contender for the memory I’d take to eternity will be no surprise to the parents among you. Like many dads, I was in the operating room with my wife at the birth of our first child. It had been a labor that started at about 1:00 in the morning and ended at 9:34 in the evening. Like any good husband, I held my wife’s hand, coached her on the breathing exercises we’d learned to minimize her pain, and urged her to “push” when the MD so instructed. And, when our first-born finally emerged, it was another small miracle. The emotional experience involved love, exhaustion, amazement, gratitude — the kind of mixture that is impossible to imagine, reproduce, or describe.

Only one more memory then, dear reader. This is one that has grown on me over the years. I had the good luck as a young man to kiss a sufficient number of attractive women to know that some were good kissers and some not so good. Some of those kisses by those kissers were enthusiastic, some indifferent, some creative, some passionate, and some loving. Some of those osculations by those osculators were ravenous, some languorous, some long, some short, some almost painful. But the one that I think about every week is the first time I kissed my wife Aleta. It was on the steps of her mother’s house, where Aleta lived, ending our first-ever date. It is doubtless colored by the life we’ve had together, our still growing love, our children, our ups and downs. But it was also memorable even at that time, without the accumulated experiences of more than 40 years since. It warms me and reminds me of how lucky I am to have met and married the best and most beautiful person I have ever known.

Well, by now you realize that the choice was really not a choice at all. It is the memory of that kiss that I’d take to eternity. That would be a heaven worth waiting for. But — lucky me — I get to relive some version of the moment every day.

The last image is a detail from Klimt’s The Kiss.