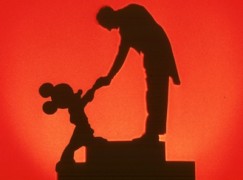 Most of us don’t think of ourselves as brave. We are not the kinds of heroes found in movies, wartime, or a burning building rescue. Yet one must become the hero of his own story. The reason is simple: there is no one else to do the job. If you are a supporting actor in the movie of your life, audition for a better part.

The clock never stops and opportunities, inevitably, diminish with age. Time still offers chances to change, to try, to dare, but we are captured by long-standing routines. One might say we have traveled the same rut for too long, the furrow deepening with each step. To get out we must climb a wall of earth with strength thought lost.

By 65, the age of my friend Keith Miller, some are already retired. But Keith had at least one more hurdle, one waiting for him over 40 years. Such youthful aspirations are patient, sitting quietly in the back of life’s class, hoping for attention, never raising a hand.

Long ago Keith attended a conservatory and took classes in conducting. He even conducted a chamber group a bit back then, more recently a stint leading a community band, no strings. Keith can’t be called a professional musician, though he has taught piano. The insurance company at which he works as a top-tier technical support analyst is not a wellspring of conductors.

Nevertheless, he had the nerve to apply to the International Masterclasses Berlin, where he would reside for six days in March; and, if he survived, lead the Berlin Sinfonietta in one movement of a romantic masterpiece. Keith was one of 11 students from Belgium, Germany, Italy, Spain, the Netherlands, Japan, South Korea, Taiwan, Argentina and the USA;  some working conductors with their own ensembles. Almost all were at least 30 years younger than my friend.

But, this is Keith’s story and he needs to tell it:

Packing my luggage for Berlin, I carried expectations, too. Not only from years of listening, but by studying the scores in the months before the masterclass: three symphonies by Brahms, Schubert and Schumann.

This was, after all, my inauguration into the world of orchestral conducting. Sleep medication was the only way to calm my bedtime energy. Most of the anticipation came from the unknown, all that is not in the musical score:

How might the maestro react to my lack of experience? How would I fit, being the oldest student? What of the orchestra’s cooperation and opinion? Would I make good music?

The first rehearsal generated the natural nervousness, heart-palpitations too, but also an internal reminder, “I can do this.” Maestro Shambadal’s steely eyes focused on me. The maestro, Principal Conductor of the Berlin Symphony, was born in Israel and studied with many “greats” including Giulini, Markevitch and Celibidache.

After a few deep breaths I began Schumann’s 4th Symphony. Quickly came a loud clap. The orchestra stopped. Maestro yelled from the back of the room, “It begins on the 3rd beat!” I made the correction and got through ¾ of the first movement before my time was up. A few other stoppages occurred for matters of technique and interpretation. I reminded myself I’d come for just such instruction.

I realized I needed to improve. My desire for the maestro’s approval quickened. The ensemble’s response to my leadership lacked enthusiasm and I knew it.

Three more rehearsals followed and group evaluations, as well, before the concert at which we would all perform. We reviewed videos of the 11 conductors, mine included.

Ugh! My posture was terrible. I looked like a bent old man. Maestro alluded to the same thing. I worked on straightening up, without which I couldn’t communicate command and authority. Here, perhaps, was the explanation for my initial failure to elicit what I wanted from the musicians.

I was selected to conduct the second movement of Schubert’s 8th Symphony at the concert. I marked the top of every page of my score with three words:

Keith worked with an experienced orchestra, many of the musicians retired members of the Berlin Philharmonic, Berlin Radio Symphony and regional orchestras, along with younger instrumentalists.

Hundreds of years of accumulated experience face a newbie. Some such ensembles take pride in being able to size up a conductor in minutes, and tear him down in less time. Or ignore him and give “their” version of the piece. Still, each player has a job to do: taking the conductor’s vision as achieved in rehearsal, and making the black notes on white paper sing. Keith learned the conductor’s job, too:

His score holds all the notes, every instrumental line on the same page: dizzying to see, much less read while everything is happening in front of him. There is no opportunity to search the lines, the musicians’ faces, and be the director, too. Without an instrument, armed only with certainty, the knowledge of everyone’s role, and his ability to persuade and inspire, he must make something old into something new.

Striding up to the podium I was confident and enthusiastic. I brought along a week’s education.

I led with warmth, lyricism, and the dark drama there in the score. The players were spot on: tempo, dynamics and music-making.

What was experience like? The most exhilarating of my life.

I turned and bowed to the audience. Smiles all around. When I asked the orchestra to stand, I saw many smiles among them, as well. I shook the first violinist’s hand and received one word enthusiastically delivered: “Bravo!” The first cellist gave me a hearty thumbs-up.

My mind was captured by one idea.

“I want to do this again and again!”

The previous conductor and I gave each other a big hug. Later, an audience member said the maestro was watching me with full attention and nodding (not nodding off!), as if to say “very good!” After the concert, he congratulated everyone.

Returning to my hotel after a celebratory dinner, I sat at the edge of the bed and cried. All of the emotion and memories, the anticipation and fulfillment, overtook me. Once composed, I began to pack for the trip home.

Courage takes many forms. Sometimes it is simply making the music that is in you, waiting to be made. Taking a risk, not asking permission.

Here is a man who made his music:

17 thoughts on “A Different Form of Bravery”