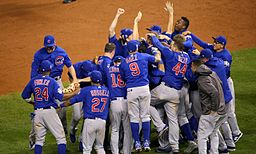 I am about to rain on the victory parade, but with a smile. I offer a few thoughts on the psychology of experiencing the first Chicago Cubs World Championship since 1908. Plus a word of condolence to the Cleveland Indians and their fans.

The photo of the 2016 Cubs World Series celebration is the work of Arturo Pardavila III as sourced from Wikimedia Commons.

7 thoughts on ““Do They Still Play the Blues in Chicago?” Cue Up the Post-World Series Blues”