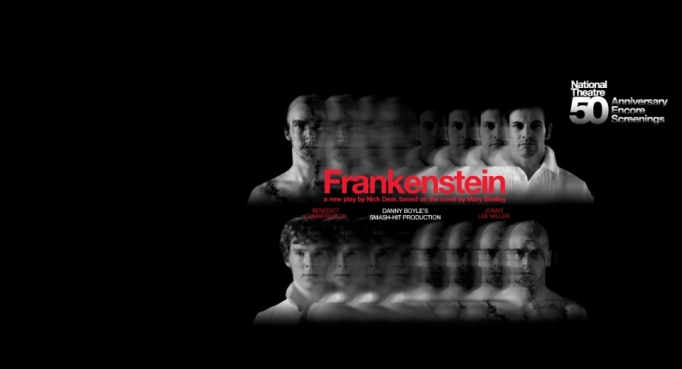 This post is not about the movie you saw starring Boris Karloff or Gene Wilder and Peter Boyle. Somehow Hollywood made conventional monster movies from something very different and infinitely more touching.

Mary Shelley’s 19th century novel is the story of a man-created creature who is abandoned by his “parent” and is so badly treated by others that he becomes something that he himself hates: a murderer. It is also a tale nearly 200 years old that has a great many contemporary implications, but two in particular that came to my mind: will man and his science be our saviour or our destroyer? Will we manufacture our own death through scientific advances or control the secrets that have thus far led to both medical miracles and misery?

And I’ll add two more which are not a great leap from Shelly’s story: shall we keep destroying or polluting nature by chopping and digging and drilling and fouling the air, simultaneously making it less beautiful by the very act of trying to perfect our lives? Finally, will the increasing abandonment of the impoverished, eventually cause them to rise up in revolution (like Frankenstein’s monster) and create their own wanton destruction? If you wish, you can attach almost any of Shelley’s ideas to war, plastic surgery, the efforts to extend human life, global warming, the growing underclass, etc. All of these are wrapped in a ball of intolerance, ambition, and man’s ability to justify his worst behavior, all themes that are central to this work of art.

The creature is not even given the dignity of a name. His master — the man named Viktor Frankenstein who made him — cannot bear the sight of his own “child” (an eight-feet-tall male) of massive strength, great intellect, and astonishing agility, so the “monster” enters the world by himself, without yet understanding it or knowing how to speak.

He learns the terrible lessons that experience with mankind will teach him: that those who are different or ugly are ridiculed or physically attacked. That he alone in all the world has no playmate, soul mate, parent, or companion. And, without my giving away precisely how it happens, he does learn to read the loftiest books and speak eloquently, not the grunts of the character Karloff created for film in the 1930s (pictured below). Science has gone awry and the scientist Frankenstein has abandoned his creation, hoping he will just go away and be forgotten. 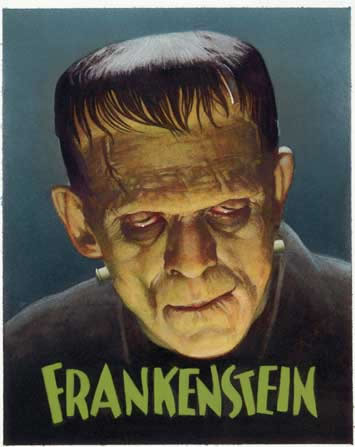 But the monster is touched by the beauty of nature, the song of the birds, and the warmth of the people who inhabit a country home he comes to live nearby; especially moved by the human relationships he has not achieved himself. Further efforts to find a social place in the world fail utterly. The unfairness overwhelms him. The artificial man finally begins to resemble in personality what he looks like in physique and physiognomy. He does some terrible things out of frustration, unfairness, anger and imitating the mistreatment he regularly receives even when he tries to do good, like saving a young girl from drowning.

The man-monster tracks down his creator and attempts to make a bargain: create me a mate, someone as outcast as I am, so that at least the two of us can have a life with each other. If you don’t, I will track you wherever you go and make your life some version of the misery that is mine. Viktor Frankenstein has grave doubts about the wisdom of this arrangement and fears that two such creatures will do more destruction than the one he has already created. For the rest of the story, you will have to do the reading of this brief but compelling book (I read a free download from Amazon).

When does man’s ambition and arrogance take him too far? Human cloning? Weapons of mass and indiscriminate destruction? Intolerance of those who are different, not just in looks but in habits, religion, and values? Why isn’t the beauty of nature enough? Why must we have more and do more and control more of the things that people used to give over to gods and goddesses?

In the end there are two monsters. The nameless one created by the hands and machinery of Viktor Frankenstein whose real malevolence was unleashed by the unkind world that had no place for him. The other, Viktor Frankenstein himself, who becomes appalled by the “thing” and so obsessed with what his creation had done to him and those he loved that he too seeks vengeance. And, in the end, we are sympathetic to both and touched by both. We have witnessed how abuse can produce abusers even among the most sensitive, high-minded, and intelligent among us. The abused are at risk of becoming the thing that they hate.

The monster knows that the evil he performed has not just been to others, but to the best in himself.

No sympathy (shall) I ever find. When I first sought it, it was the love of virtue, the feelings of happiness and affection with which my whole being overflowed, that I wished to (participate in). But now the virtue has become to me a shadow and that happiness and affection are turned into bitter and loathing despair. (Where) should I seek for sympathy? I am content to suffer alone while my (life) shall endure; when I die I am well satisfied that abhorrence and opprobrium should load my memory. Once my fancy was soothed with dreams of virtue, of fame, or enjoyment. Once I falsely hoped to meet with beings who, pardoning my outward form, would love me for the excellent qualities which I was capable of unfolding. I was nourished with high thoughts of honor and devotion. But now crime has degraded me beneath the meanest animal. No guilt, no mischief, no malignity, no misery, can be found comparable to mine. When I run over the frightful catalogue of my sins, I cannot believe that I am the same creature whose thoughts were once filled with sublime and transcendent visions of the beauty and majesty of goodness. But it is even so; the fallen angel becomes a malignant devil. Yet even that enemy of God and man had friends and associates in his desolation (in hell); I am alone.

For those who prefer movies, the National Theatre Live performances by Benedict Cumberbatch and Jonny Lee Miller in the lead roles can still be seen here and there in encore presentations. They are based on a two-hour adaptation of Shelley’s work by Nick Dear. I saw the one with Cumberbatch as the monster. I’m told the other one, where the main players switched roles, is equally good. Here is the site for these films, if you wish to act while they are still being shown: “http://ntlive.nationaltheatre.org.uk/productions/16546-frankenstein/&#8221;

2 thoughts on “The “Real” Frankenstein: How Abusers are Created”