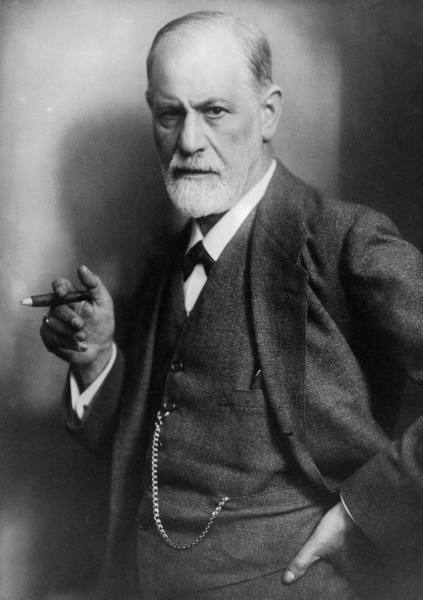 We take movies for granted these days. But, in the days before film, and especially before movies “talked,” one had little sense of what a person, frozen in time by a still photo, might have been like. How did he smile (or not smile)? How did he speak? Did he move quickly? Was he alert or sober? Did his greatness seem to emanate even from the film?

The Freud we can observe in his home movies is a man who loved dogs, showed affection for children, and furnished his office in antiques; a man who appears much more friendly and approachable than the austere figure pictured above. Many have observed that the old objects of art Freud collected and his passion for archeology might have reflected his interest in many different old things, including the buried mysteries and memories in the minds of his patients.

Here are home movies narrated in lovely English by his famous daughter Anna, who took up the therapeutic baton from her father. The first video is an excerpt from the longer one that follows. The initial video is about two minutes long: http://www.artsjournal.com/slippeddisc/2013/11/watch-sigmund-freuds-home-movies.html

The longer movie (23 minutes) from which it comes is here: http://www.youtube.com/watch?v=SQOcf9Y-Uc8

The only known recording of Freud’s voice, coming near the end of his life in 1938, was recorded by the BBC in London and is also in English. It is very brief (less than two minutes) and his English is heavily accented: http://www.youtube.com/watch?v=5jJ6Lhk1pNg

These films allow us to observe the great man at home and at ease. We see bits of his waiting room and office at Berggasse 19 in Vienna, both before and after the Nazis annexed Austria. We see many friends, a brief stay in Paris upon his escape from Nazi controlled Vienna, and his last home in London, England. His departure from Austria (Freud was Jewish) was not easy and we can be grateful that his office was carefully photographed by Edmund Engelman, whose photos are now in a book entitled Berggasse 19, taken just before Freud fled to freedom. His office is presently a museum, furnished very much to look as it did when he worked there.

There is some poetic justice in the fact that Freud died a free man. It was, after all, his life’s mission to free the minds of his patients from the things that troubled them.

The 1922 photo of Freud was taken for Life Magazine by Max Halberstadt and is sourced from Wikimedia Commons.