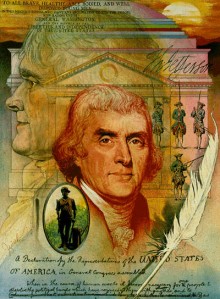 I was not prepared for the shock of it. It was an event I’d feared since my father’s heart attack when I was 12 and had thought about frequently as he aged. But the notion of the stroke-out death of my 88-year-old father in the year 2000 would be a surprise — would catch me up-short — was not anticipated, despite all the people I counseled in their grieving. It was the difference between knowing about a thing and living it.

Nor could I have imagined the almost animal-like pain, the inarticulate state of being words can’t describe, and the feeling of emptiness following; something like an ache at the cellular level, a kind of psychic moan.

And then fatigue, for months, as if, in his death my father had taken my life’s energy with him. My children eventually asked my wife, “When will dad be himself again?”

And yet, the event itself, the death of a parent before the death of his child, is a commonplace. It is the way things are supposed to work. Beyond a certain age, we all know it will almost certainly happen. We see it happen to others. But this observational experience does not bring it home, make it real.

I can still tell you the name of the first person I knew to lose a parent. My classmate Marilyn Levin, some time around sixth grade. The event made an impression, a scary impression. And then, in high school, Michael Karsen’s mother died. You note these things with a shudder and don’t know what to say to your classmate. Perhaps you say you’re sorry or say nothing or ignore the person — avoid eye contact. All because it is so terrible and, you think, “It could have happened to me. It still could.”

And finally, if you’re lucky, it happens only much later. By which time, again “if you are lucky,” you have gotten old enough that your children recognize you are aging; that at some point you too will die. And now you have another reason to stay alive: to spare your children the pain of your demise.

No, spare is not the right word. Postpone is.

Life is like a relay race, batons passing from parent to child, to their children, and on and on. It has been going on since the beginning. It is the least remarkable thing about life, that it ends. And yet, it is the most serious and dreaded thing, as well.

If you live long enough, then you realize life eventually becomes a series of goodbyes, departures. Not the life of your childhood, which was a constant flow of hellos, arrivals.

But what if you lose your spouse at a very early age? That is not “supposed” to happen. The third President of the United States knew about this. When he was 39, Thomas Jefferson’s 33-year-old wife Martha died. The couple had been married just 10 years. 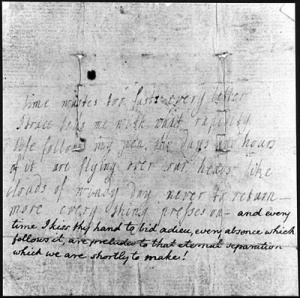 Both of the Jeffersons enjoyed reading aloud to each other. One of their favorite books was The Life and Opinions of Tristram Shandy, Gentleman by Laurence Sterne. Martha was trying to read a portion to her husband as she lay dying, trying to convey her feelings about the separation soon coming. When she became too weak to speak the words, she began to write them:

Time wastes too fast: every letter
I trace tells me with what rapidity
life follows my pen. The days and hours
of it are flying over our heads like
clouds of windy day never to return–
more. Every thing presses on —

When even this became too difficult, her husband picked up the pen and completed the passage from memory (see the image just above):

and every time I kiss thy hand to bid adieu, every absence which follows it, are preludes to that eternal separation which we are shortly to make!

Jefferson is reported to have fainted when his spouse died. He was carried from her bed. For three weeks he didn’t speak or leave his room. Only his daughter Patsy was finally able to bring him out of himself. She later wrote:

He walked almost incessantly night and day, lying down only when nature was completely exhausted on a palette that had been brought in during his long fainting fit. When at last he left his room, he rode out, and from that time he was incessantly on horseback, rambling about on the least frequented roads and just as often through the woods, and those melancholy rambles. I was his constant companion, a solitary witness to many a violent burst of grief.

For the rest of his life, Jefferson kept the small piece of paper on which he and his wife had their last literary dialogue. The paper and a lock of his wife’s hair, captured in an engraved locket he had made for the purpose, remained in a secret drawer next to his bed. Jefferson never remarried, although there is evidence that he did have a sexual relationship with one of his slaves, Sally Hemings. 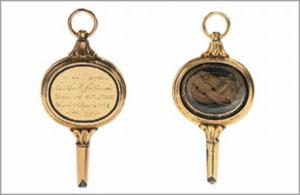 Thomas Jefferson became President 19-years after Martha’s death. He would die on July 4, 1826, the same day as his friend John Adams, the nation’s second President. It was precisely 50 years after these men signed the Declaration of Independence, a document drafted by Jefferson.