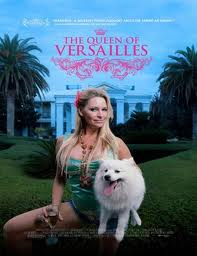 Would a yearly outlay of a million dollars on clothing be enough for you? The documentary film The Queen of Versailles shows what is possible when you strike the word “enough” from your vocabulary. It introduces you to a couple who give new meaning to the phrase “conspicuous consumption.” They are easy to laugh at, as many audience members at the showing I attended did, but the hilarity is based on an inability to see oneself in David and Jackie Siegel, the Florida husband and wife who set out to build the biggest house in the USA. If that doesn’t sound much like you or me — well — just keep reading.

The story begins before the economic meltdown of 2008 that hammered David Siegel’s time-share real estate empire, Westgate Resorts. It ends in 2011 with him still trying to rescue both that business and the completion of a 90,000 square-foot estate fashioned after the Palace at Versailles. He intended to build it, as he says in the movie, “because I could.” The Siegels envisioned 30 bathrooms, 10 kitchens, stadium-level sports facilities, grand staircases, and a wing — a wing — for the children, who number eight living with them; not to mention the 19 member staff who were already present in the 26,000 square-foot Florida mansion that had become “too small.”

Where did David and Jacqueline come from? Mr. Siegel’s midwestern parents were addicted to gambling and lost everything on their visits to Las Vegas. He recalls that his mother, on a return trip from a gaming disaster, asked her husband if she could have a candy bar. He responded that there was no money left even for that. As a result, every Christmas Day, the 74-year-old Mr. Siegel buys himself a large Hershey bar and eats it in memory of his mom. Perhaps his parents’ failure at the gambling tables of Nevada also was behind the 52-story “vacation ownership resort” he built for his business there, a kind of posthumous triumph at the scene of his parents’ defeat. At least, before David’s empire started to disintegrate.

Mrs. Siegel, his 43-year-old surgically enhanced former beauty queen wife, also came from a humble background. Her college degree allowed her to work in engineering, but she seems uninterested in anything associated with what might be called an intellectual life. Indeed, the Siegel’s eight children (one is actually Jackie’s niece) had apparently not been encouraged to prepare for college until David’s financial distress created doubts about his ability to support them.

Nor do we observe any discussion of religion or values, although one might surmise that “The Golden Calf” is the only object of serious worship. Still, viewers should remember that the family was filmed over a period of three years. We only get to see those few moments that fit the narrative the producer/director, Ms. Greenfield, wants to show us — the story she wants to tell.

That said, Mr. Siegel is pretty much a self-proclaimed workaholic, portrayed as having little intimacy with his children. Indeed, he sees his wife as just another child, but one who compulsively buys things, including a large tin of caviar for herself even as the banks are threatening foreclosure. Yet the film maker Lauren Greenfield is careful to capture Jackie’s generous, warm, and outgoing nature. Indeed, she appears to be fonder of her husband than he is of her, despite the fact that even one of their children recognizes that Jackie was something of a trophy for dad. 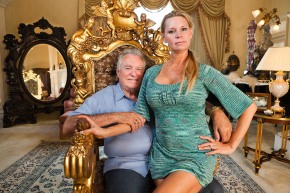 Mr. and Mrs. Siegel sitting on what appears to be a throne.

A couple of the most telling moments in this very entertaining but sad story come when Jackie and the kids, unable to fly the private jet that they are accustomed to, have to travel like the rest of us. This prompts mom to ask them “How is it, flying commercial?” When she attempts to rent a car, the young man behind the rental desk is stunned to hear her ask, “What’s the name of my driver?” There is none, of course. Back home, Jackie does have a driver and a limousine, to boot. But the disarray caused by having to lay off 15 of the 19 servants and nannies is something to behold, resulting in a level of filth and dog poop that belies the luxuries that the Siegels still find a way to afford.

It appears that Mr. Siegel was not pleased with the movie and sued Lauren Greenfield for “defamation.” I can only imagine that the story he envisioned when he was on top of the world was very different from the film you will see at the theater. Joe Nocera’s article in the The New York Times reports his claim that his business has bounced back and that his palatial home is being completed after all. For anyone who, like Mr. Siegel, gloried in his success and hoped for another feather in his cap, his big screen setback would have been a bitter pill.

So what does all this have to do with you and me? Most of us have been captured (at least a little) by the empty quest for “stuff” that is “The American Dream.” Are we more modest in our aspirations than the Siegels partially because we don’t have the opportunity that they had to indulge those desires? As a result, we either settle for the big screen TV or two or three that we really don’t need or wish we could buy at least one. What I’m talking about is the worm in the rotten core of the consumption-driven apple that most of us want a bite of.

I write this about a day after having seen the movie. My emotional reaction is interesting, at least to myself. The film produced two feelings in succession that still linger. The first was the sense of emptiness at the heart of the Siegel’s lifestyle. As Wordsworth said, “Getting and spending we lay waste our powers.”

The second reaction, however, was to think of my wife and children, my family and friends, my good health, and realize just how lucky I am. The Siegels can have their private jet and dazzling luxury. More — more is the pity.