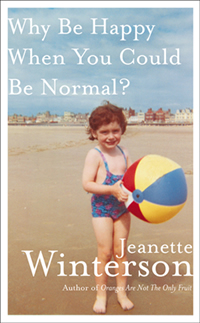 What is it like to be raised in a strict religious home? Fundamentalism without the fun, at least according to two recent memoirs. And though the authors were raised in Pentecostal Christian and Orthodox Jewish faiths, respectively, there are more similarities to their experiences than differences. Indeed, these two stories suggest that Tolstoy was wrong when he wrote that “Happy families are all alike; every unhappy family is unhappy in its own way;” at least for the unhappy families named Winterson and Auslander.

Sounds grim, doesn’t it? But Ms. Jeanette Winterson (born in 1959) and Mr. Shalom Auslander (born in 1970) write so brilliantly, often with side-splitting humor, that you don’t come away darkened by their experience, even though you do enter into their darkness. Winterson’s recently published memoir, Why Be Happy When You Could be Normal? takes place in northern England, mostly in the 1960s and ’70s, while Auslander’s 2007 Foreskin’s Lament is located in the New York City/New Jersey area of a more recent time, with a brief side-trip to Israel.

Both writer’s survived oppressive childhoods, although Auslander’s family might have been somewhat more loving. Physical abuse was present in both, with Winterson’s again more severe. How did they survive? Winterson’s comments capture a possible answer:

The one good thing about being shut in a coal-hole is that it prompts reflection.

Read on its own that is an absurd sentence. But as I try and understand how life works — why some people cope better than others with adversity — I come back to something to do with saying yes to life, which is love of life, however inadequate, and love for the self, however found. Not in the me-first way that is the opposite of life and love, but with a salmon-like determination to swim upstream, however choppy upstream is, because this is your stream…

“Mrs. Winterson,” as the author refers to her adoptive mother in the text, is described as “… a flamboyant depressive; a woman who kept a revolver in the duster drawer, and the bullets in a tin of Pledge. A woman who stayed up all night baking cakes to avoid sleeping in the same bed as my father…” and who expected Jeanette “…to live out some of her unlived life.” Mother was “… out of scale, larger than life,” filling up a phone booth with her girth. As to the author’s father, Winterson recalls an earlier novel where she wrote “My father liked to watch the wrestling, my mother liked to wrestle.” When Jeanette disappointed them, mother told this adopted, only child that “The Devil led us to the wrong crib.”

Both Winterson’s and Auslander’s homes were full of carefully observed restrictions. For Auslander, the various Jewish dietary laws chaffed (forbidding pork; not eating milk and meat products at the same time or on the same dishes). All the while, God’s ominous presence loomed as large for Auslander as Mrs. Winterson did for Jeanette. According to Auslander, not only did the Jews have to deal with historic mistreatment by human enemies, but those disasters “… were nothing compared to the punishments meted out to us by the man himself. Then there would be famines. Then there would be floods. Then there would be furious vengeance. Hitler might have killed the Jews, but this man (God) drowned the world…” recalling Noah and the story of his ark.

Unlike Winterson’s passive father, who struck Janet only upon instruction from his wife, Shalom’s dad could be violent after drinking too much wine. Auslander’s family troubles didn’t end with father. He compared his own preoccupations with those of the Rabbi of his temple: “Rabbi Blonsky was forty years old, and he worried a lot about the Jewish people. I was nine years old, and it was the Jewish people in my house I was worried about.” As the boy saw it, “… my mother had more pictures of the dead on our walls than she had of the living, and the dead seemed to be having a better time; my brother hated my mother and resented me; my mother loathed my brother and doted on me and my sister; my sister hated my brother and pitied my mother; my father hated us all; and my mother sighed, washed dishes, and sang mournful Yiddish songs about the miserable futility of life…”

That futility found a match in Jeanette’s Pentecostal Christian home, where mum prayed every day “Lord, let me die:”

My mother, Mrs. Winterson, didn’t love life. She didn’t believe that anything would make life better. She once told me that the universe is a cosmic dustbin — and after I had thought about this for a bit, I asked her if the lid was on or off.

Both Winterson and Auslander rebelled, although in the female’s case it was at the expense of a three-day church exorcism sans food and heat. The church flock took mum’s lead in this ritual when Mrs. Winterson reported her daughter’s iniquity to them. They literally tried to purge the devil from her with the help of beatings, all while she was permitted little sleep. To their disappointment, the devil didn’t “pop out.”

Winterson, who lived in a family that forbade secular books other than Mrs. W.’s murder mysteries, found refuge in reading and hiding those that she smuggled into the house, until her mother discovered the cache and burned them all. Auslander ate forbidden food, smoked marijuana, looked at pornographic magazines, shoplifted, and violated Sabbath restrictions, all surreptitiously. But for Shalom, the fear of a vengeful God never left him, as he remained “painfully, cripplingly, incurably, miserably, religious” at the same time that he gave God “the finger” by violating religious strictures, fearing the worst would follow.

In each story there is an inevitable showdown between the young adult protagonist and the parents. For Winterson, it came in a confrontation with Mrs. W. about Jeanette’s lesbian relationship with another young woman and a daughter’s failure to please her mum:

‘Jeanette, will you tell me why?’

‘You know what why…’

But I don’t know what why… what I am… why I don’t please her. What she wants. Why I am not what she wants. What I want or why. But there is something I know: ‘When I am with her I am happy. Just happy.’

She nodded. She seemed to understand and I thought, really for that second, that she would change her mind, that we would talk, that we would be on the same side of the glass wall. I waited.

She said, ‘Why be happy when you could be normal?’ For Shalom Auslander, the crisis in his relationship with his parents and sister came over the question of the ritual circumcision of his newborn son; and that his religion required him to obtain this “mutilation” (removal of the foreskin on the baby’s penis) according to an ordained schedule and by the proper religiously anointed person, rather than in a hospital by a physician before discharge, as in fact happened:

Thousands of years ago, a terrified, half-mad old man genitally mutilated his son, hoping it would buy him some points with the Being he hoped was running the show. Over the years, equally terrified men wrote blessings and composed prayers and devised rituals (for this event)… Six thousand years later, a father will not look his grandson in the face, and a mother and sister will defend such behavior, because the child wasn’t mutilated in precisely the right fashion.

As you might guess, both writers struggled with creating loving and trusting relationships, but each seemed to have made significant progress by the time we reach the end of their stories. Auslander’s is the more wildly irreverent book — both bitter and bitter-sweet. Winterson’s memoir is more knowingly psychological and sad. Both will make you laugh out loud. Both will make you think about what our parents do to us and what we do to ourselves and our own kids. Neither one will cause you to give up your faith, if you have one; or convert, for that matter. Their memoirs serve as a reminder of what a long reach parents can have and that religion, in the wrong hands, is something like Mrs. Winterson’s revolver.

The top image is the dust jacket of Jeanette Winterson’s Why Be Happy When You Could Be Normal? sourced from her website where you can also hear her reading from the book. The second image is the front cover of the paperback version of Foreskin’s Lament. Two videos that include Auslander’s voice-overs from his book can be found here: Auslander videos.The final picture shows God measuring the world. It is William Blake’s 1794 Ancient of Days, sourced from Wikimedia Commons.

2 thoughts on “The Psychology of the Memoirist: Jeanette Winterson and Shalom Auslander”